I’ve noticed I occasionally get these temperature dropouts during a print. Everything still seems to be working ok, but it looks like the reported temperature pops to 0 and then back. Has anyone seen this? I feel like I might want to proactively replace the thing before it fails completely.

I think a cracked wire is likely in the cable chain from the control board to the thermistor connector on the heat bed.

I think a cracked wire is likely in the cable chain from the control board to the thermistor connector on the heat bed.

That makes sense. As the bed moves, it could be making intermittent contact. I’m in the middle of a long print now, so I can’t get to it, but is it fairly obvious which wire it is?

Since your reading goes from normal to zero rather quickly and back i too think your wire is to blame and is bending /breaking and then touching when it comes back. Underneath the heat bed there should be four main wires coming from your heater / thermistor. The two thickest gauge wires (and large battery-style connector) are for your heater, the small other two are your thermistor. In theory you should see two small red wires with a small black connector connected to two small yellow wires. Your colors may vary. 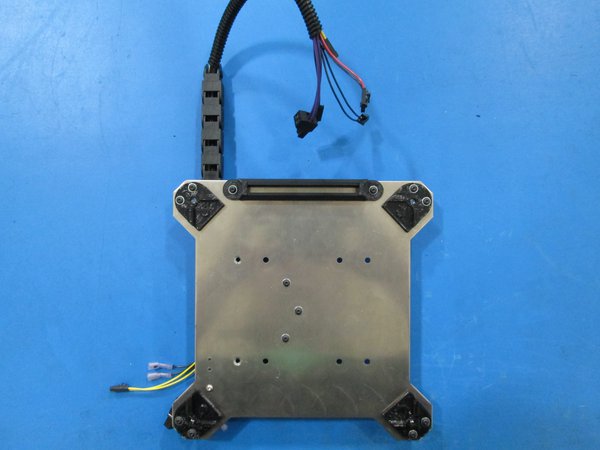 It finally got bad enough today that I couldn’t ignore it. The temperature kept dropping to 0 in the middle of a print, causing the heater to stop and the part to pop off the bed midway through. After a bit of fussing around, I found that I could trigger the problem by jogging the Y axis back and forth near the middle of the range, and moving it all the way toward the front would usually cause it to come back. So definitely an intermittent connection of some sort.

I took the bed off and measured the thermistor – it read around 100k reliably, no matter how I twisted or pulled on the cable. So I believe the bad connection is actually in the wiring harness, which looks a pain to disassemble. The “good” news is that taking it apart and putting it together again seems to have made the problem go away for now. That zip tie is awfully tight, maybe it was pulling on something, or at the very least, moving the cables around is temporarily preventing the break from breaking.

I don’t like the idea that there’s a failure waiting to happen in there, but I’ll probably let it go until it craps out again and then see about pulling out the whole wiring harness.

Thanks for all the advice and directions in this thread.

Pah. Now that I’ve installed the 1.1.0.9 firmware, I’m experiencing “MINTEMP triggered” aborts, even when I’m not seeing temperature dropouts. I guess there must still be a loose connection and that the MINTEMP monitoring catches very short glitches in between the one-second polling in OctoPrint. I suppose this is a good thing.