I have seen a few of you have stick those LED strips on your top rails.

I have ordered some 12v strips on eBay and i am wondering how you all have wired them up.

I am looking to have them come on when i switch the printer on.

Here is the plastic printable lightbars that will fit a Taz http://www.thingiverse.com/thing:1803781

I have 24 volt LED’s on my latest chassis, it’s powered directly off the main power supply, going out to a lightbar on off switch so I can disable lights for night printing if i don’t want them on. THe older one is powered off a 12v wall power supply separate from the 24v power supply loop. You could also use a 24v to 12v buck converter and power them off the main line that way.

OK great, thanks for the link, i will have a look at that.

I will have to see what the LED strips come with as the listing was a bit low on details.

I used the self adhesive strips (they have never come loose) and they are 12v that came with a power brick. I plugged everything (printer, camera, LEDs…) into a power strip and I use that to turn it all on and off with a single switch. I love my LED lights, they make it so much easier to see what I am doing.

I went with pure white (5,000k) over colored as I was not trying to make the machine look good but rather making it easier to see everything.

I have installed these lights I found at Radioshack.

They are much brighter than most of the cheapo ones you can find on amazon and ebay. I wired mine right to the 24v power supply connections inside the electronics enclosure and used a 24V-12V converter from amazon. The strip is the perfect length to cut in half and put one half on each upper horizontal rail. Some very basic soldering and wiring can complete the job in 10-20 mins. I have installed them on a Taz 5 and 6. If interested, I can post pics.

I have installed these lights I found at Radioshack.

They are much brighter than most of the cheapo ones you can find on amazon and ebay. I wired mine right to the 24v power supply connections inside the electronics enclosure and used a 24V-12V converter from amazon. The strip is the perfect length to cut in half and put one half on each upper horizontal rail. Some very basic soldering and wiring can complete the job in 10-20 mins. I have installed them on a Taz 5 and 6. If interested, I can post pics.

I am very interested! Wanting to install a live webcam feed, and need to add some good lighting. Any links/info is greatly appreciated.

This is the set I used. 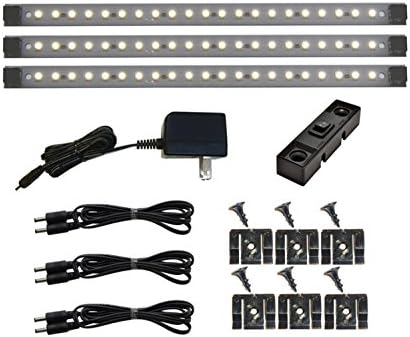 Three 8-3/4" long panels with 21 LEDs each. Very bright, white light (I chose the “pure white” which is about 4200k). Works great for webcam on Octoprint.

I have not integrated the power/wiring with the printer – instead I just used the provided power block and switch, placing the switch on the frame of the mini. I did that partly because I’m lazy, and partly because there are times (like when working on the print head, or heated bed) where I wanted the lights on while the printer was off.

Dude this is exactly what I was looking for! Thanks for sharing and taking the time.

For those of you who’ve wired directly into the on board power, can you clarify which terminals you landed on? Ran across something interesting during a recent upgrade session on my Taz 4. I upgraded to the V2 single extruder, and while I was inside the control box, I went ahead and decided to tie my LED light strips into the onboard 24V power. I tied into the main power supply input terminals and ran wires out through two of the spare terminal posts in the XZ connector, and then up to a rocker switch, and finally to my lights. I chose to tie into the topmost power, which in hindsight appears to have been a bad idea. The lights work/look great, but my prints immediately went to garbage. Bad prints under really great light look 100x worse, BTW. My Z-axis in particular seemed to go crazy, and couldn’t keep track of steps. 20mm calibration cubes were coming out around 15.5mm tall. X/Y dimension seemed close, but were bulging due to the bulging from the compressed Z layers. I broke my cardinal rule and made multiple changes during one overhaul, making troubleshooting a challenge.

Didn’t think the new extruder should really have any impact on Z axis travel, so suspected the lights creating interference with the steppers. In pulling up the RAMBo manual, I see that the power I tied into also feeds the logic and motors. Assume the LEDs or running the power wire in the same cable bundle as the other XZ connector port wires are creating some sort of interference, because I pulled the two wires I landed back off, and ran some more calibration cubes and all is back to normal.

I’ve seen a couple references to auxiliary 24V power outs on the board, but I’m not sure on the exact locations/specs, or if the Aux power out is turned on by default, and also not sure if it is 24V by default. I see piercet’s post in this thread referencing the main power supply, wondering if you chose the lower two terminals, which I think power the heated bed, or if you routed wires in a different fashion, avoiding the potential power/signal wire bundling I did?

Looking for any thoughts from guys who’ve had success pulling 24V out of the control box to run LEDs?

Better late than never?
I considered using the internal power supply, but there are enough posts of issues with electronic oddities in the controller made me leery of tapping into it. The printer power switch cuts the AC into the unit, so I have no hesitation using an external power switch. I use a separate supply for the lights and plug it, the printer and computer into a power strip and use the switch on the power strip. Computer is set to start on AC recovery, so the whole system is controlled by one switch. I used 12v adhesive LED strips and have an inline dimmer, the strips are slid into the bottom T slot of the top rails. If you were really motivated to use the internal supply, you could wire them in series; I tested that and it works.