Too good to be true

So i just got my Taz and I’m looking to slowly upgrade it as much as I can and if I can’t make it into a 6 I’ll still bring it up to date and give it the best parts available. Anyway I’ve been looking at hotend s for it I have a mosquito abd dragonfly that i was thinking about installing. But i wanted a Taz hot end but I’m not paying that much for a hot end. I have the money i just think it’s stupid to pay 500 for a hotend when you can get I’ve for 100 or 150 that will print the same is not better. Found a dual multi material în ebay for around 225 and was thinking about getting that even i see on Amazon a version 2 for 108. Now I’m thinking since lulzbot is the seller they’re just trying to offload since v3 is out . And 108 sa hell of a price. And I buy it. As soon as I make the purchase i see the price sky rocket 410 up to 528. I can’t be that Lucky. This happened to me before with a wanhao duplicator. Saw it for 199 soon as I buy it ,it jumps up to 600 dollars and the unit in got was a returned and fill of problems. So I’m a little suspicious. I wrote lulzbot already and told them I’m fully expecting a good working unit and Amazon said they’ll replace it if it has problems. O wouldn’t really care i just don’t want this to be a lemon and i kids out on the other one on eBay. 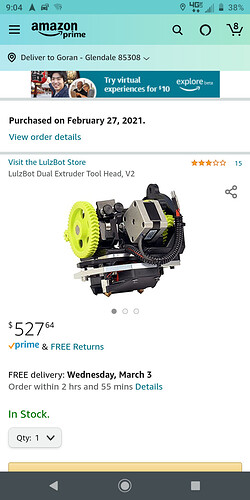 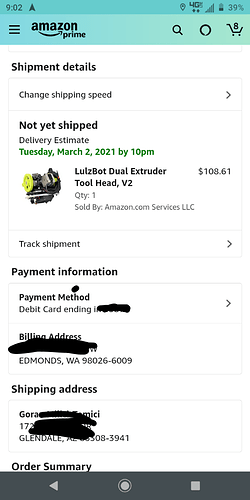 That’s weird the one on eBay shot up as we’ll. That one is 744 dollars now. I’m pretty sure that was the same item but what’s with these extreme high and low prices. 108 makes you think something is wrong with it and 528 and 744 makes you think they’re smoking meth and making up prices.

It is too good to be true, LulzBot ceased all business with Amazon in January of 2020.
Not sure who your order would be fulfilled by.

You are certainly free to order it, but I can assure you that the order is not being fulfilled by LulzBot.
Amazon may still be selling through their own inventory.

It looks like the real deal i doubt they would be selling it for more than lulzbot and have it be a clone. Besides i already contacted Amazon and they said nothing fishy about my transaction that they can see and if there is something they will replace it 2ith a brand new it’s the Chinese sellers that pull sneaky stuff sometimes. Happened before with q 3d printer sm