E3D revo system for taz pro dual head with 2.85mm and 1.75mm options Would be one hell of a game
Changer for the lulzbot printers. I switched 2 of my other printers to the revo system and I gotta tell you work flow has been incredible, from changing nozzles on the fly to fixing jams within the nozzle has transformed my time from frustration to a simple fix.
The reason why I really would like to see this option is because with the dual head ($795 price tag) the right hot end one day came undone and began to ooze above the heating block as if the head block and nozzle came loose in which it never should have… and following the steps to remedy this issue the print head persisted to give me issues so I reached out to customer support and the 2 options I received for a fix were a HEAVY hit to the pockets. Since I print often I didn’t want to have my printer out of commission for a long time so I didn’t ship my tool head ( $75/per hour plus shipping for just troubleshooting). So instead I opted out for replacing my right side tool head to be replaced with a new one (somewhere In Upwards of $250). Only to go back to a system that only uses 1 nozzle system and replacing them could possibly put me in the same jam.
So having a revo system in place could eliminate this headache and expand this tool head to use other size nozzles.
Even a possible exchange service for my current tool head for a revo pro dual nozzle system would be nice to help offset the cost of having to purchase an all new pro dual head system at $700.
Just saying lulzbot it may be something you guys and customers would love.

The Pro Dual Extruder is based on Titan Aero, a compact, combination extruder and hot end, so any Revo system would probably have to be rebuilt to be based on the closest thing they have in the Revo lineup - the Revo Hemera. The Revo Hemera is not available in a left/right configuration yet, so retrofitting is going to be a lot of custom work.

Almost looks like the heat block could be machined to the thread the revo nozzle takes and possibly mated to the existing pro ( I’m not near my printer but I’ll do measurements and see how far off they can be because machining the heat block to mate with the revo would be the solution but I’m also saying this with memory of what it looks like and not actually being in-front of it with measurements).

Like others have mentioned the pro dual is based on the E3D Aero and the Revo is not directly compatible with it.

Anything is possible though, Im not familiar with the lifting mechanism of the pro dual head, but i think the tool head could be made much lighter with a Revo system.

It’s not about the aero being compatible. It’s the suggestion of lulzbot reaching out to E3D to develop an aero to be compatible with the Revo. When taken apart and looked at you can see the aero would keep it’s same form factor. what would change is where the hot end is, the base of the area would need to have a location ( lip if you will) where the revo’s retention spring would attach to and end the thread for the revos nozzles would have to be machined. On the pro since the nozzle is the part that is used to auto level the bed this would automatically take in the difference of where the revo’s nozzle now it’s ( when installed the nozzle would be a bit larger but not by much).
So the aero’s entire function would remain the same but now with a simple way to change nozzles. I know it isn’t simple to machine something but this being E3D’s product already it wouldn’t be hard for them to creat this and sell this product as an upgrade, to where lulzbot could sell as a v2 dual head for the pro. 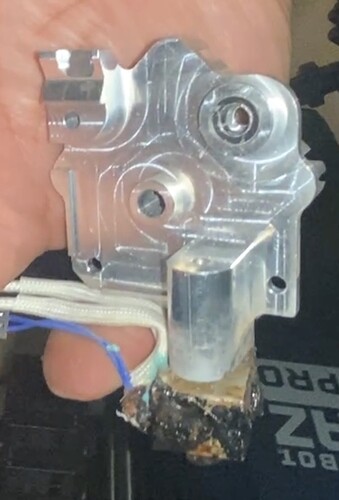 In the photo you can see the rear of the aero, and the aluminum block that the nozzle, heat block, and assembly is what I mean by it being machined to allow the REVO system to mate

I think in terms of effort it will be easier to develop a lifted mechanism for the Hemera than the Aero, especially since the revo will work on all Hemera extruders.

The aero is already in the lulzbot dual head pro. It’s a matter of machining an aluminum block with the revo threads and a place to install the heat block spring.

I think you would need a new filament guide as well. Taking a look at the hemera and aero parts the hemera is a bit longer.

If I ever get downtime from work I’ll create a cad file of how the aero could be machined out of aluminum block to accept the revo with no physical modifications to the system other then a direct replacement of the block to allow for the revo system to work.( if I had the proper tooling machine and legal approval of E3D I’d make one as proof of concept).

If you do make sure you use the 1.75mm version of the heat block as well since the revo is 1.75 only.

FWIW, It looks (from the OHAI docs) to me like you could replace the big heatsink/hotends there with Revo Sixes nearly dropin… assuming the Pro Dual hotend heatsink fans are 12v or 24v… I’d love to know if I am wrong… but I only have a pair of Taz5 single extruder machines.
Edit to add: Rambo 1.3l