I bought a used lulzbot 5 at an auction, and I’m having a few problems with it. The print quality seems pretty bad, and I think it’s because of the nozzle. After 3-5 minutes of printing, a glob of filament accumulates near the nozzle and it grows until it falls off onto the print. Also, during the first 20 seconds of the print no filament comes out, despite the extruder wheel turning. What is causing this? Do I need a new extruder? New nozzle? How do I fix it? I’ve included pictures for reference. It’s a small yellowish glob to the right side of the nozzle. Thank you!! 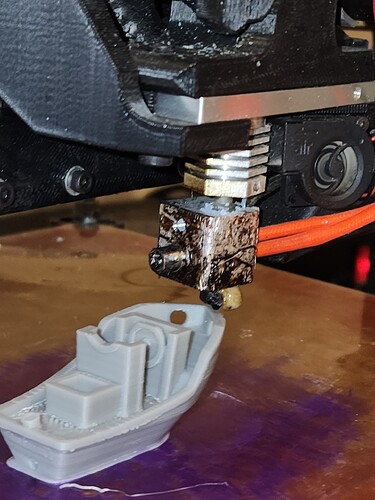 First, the leaky nozzle is almost certainly due to the nozzle being tightened while cold. While it’s hot, grab the heater block with a crescent wrench (not sure on Taz 5, but it may be 18mm). While holding that, use another small wrench to tighten the nozzle.

20 seconds is a bit long for it to spin without filament coming out. If you’re canceling failing prints, it usually retracts a length of filament to try and clear the hot end, and depending on the software you’re using, there can be additional retraction before a print to avoid oozing.

If you have a mismatch of the Cura LE version and the firmware loaded on your Taz, it can easily be doubling up the pre-print retractions by invoking a firmware and software retraction during initialization.

If you haven’t already, plug the Taz into the PC you’re running Cura LE on, and update the firmware to ensure this isn’t the case.

If you don’t have the print settings to include a skirt or brim before printing, you should. It gives time for the filament flow to balance out (and lets you watch to see that the z offset looks right around the entire perimeter of the part). It also ensures that any material that may have oozed out and is stuck to the nozzle during heat-up contributes to the brim/skirt (instead of the intended part) and replace that ooze in the hot end with more material instead of a void.

As a newer 5 owner, you may want to look straight into upgrades though, as that toolhead design isn’t great for PLA (heat creep!), and you might as well step up to something like an SKR 1.4 board controlling a new 1.75mm filament toolhead that includes a bed leveling probe. At least don’t sink a bunch of cost into 2.85mm filament that will cause you to stick with an outdated printhead.

The 5 is a very strong platform to build on, but the older 8-bit rambo board, 2.85mm filament, outdated toolhead and lack of automatic bed leveling may turn you off of the hobby. But I guess if you’re doing ABS/PETG/HIPS or even Nylon filaments and get your level dialed in, it can be a reliable printer for just about as long as you want.

I will also say you could have the wrong type of nozzle on it. I looked at a couple here where I live and they had bought/installed shorter threaded body nozzles and they did not extend up into the block far enough and thus had a small gap between the nozzle and the end of the heat break.