I remember touring the LulzBot factory when it was in Colorado with my friend and he walked out with a Mini. I was busy learning cad and cam and cutting out RC airplane kits on a home made cnc router.
Now all these years later I finally have a 3d printer of my own I bought used and not working from a co-worker for $100. I have a 10 year old and he is fascinated with 3d printers. I am fascinated he is willing to spend the time off the computer games to help me get this thing up and running! We ohmed out all the wire harnesses to the steppers and switches and found the y axis switch had no metal lever on it. I now have that replaced. All the bushings are shot and there is movement in all directions. Now is the time to upgrade the linear ways. I don’t like the rods so much nor the plastic bushings. They just seem a bit on the edge of being too wimpy for this machine. I noticed on the new TAZ machines the X Beefed up to 12mm rods. Good call on that. The newest is belt driven Z instead of lead screw. Evidently that helps with banding? I have seen upgrades using openbuilds parts. I have used them in the past on other projects so I am going to use that as an upgrade route. That kind of design seems perfect for a 3d printer where there is no side load forces to worry much about. So here is what I have to start with. Not sure if it is a TAZ4 or 5 or something in-between.

The machine will now home and move and if I get into the manual movement screen it moves in all axis, and bed warms up to temp and hot end warms up and I can make it squirt out filament.
This is all the filament I have. I need to make an order on Open Builds for some parts and need to get to over 100 for free shipping so what filament should I get from them? 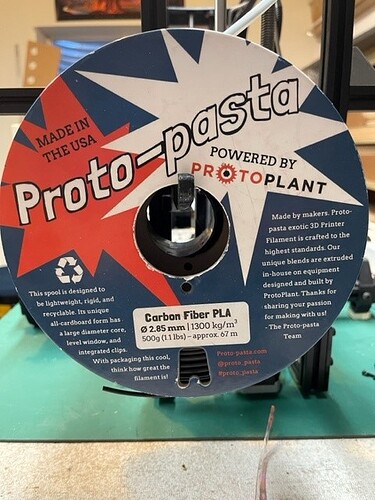 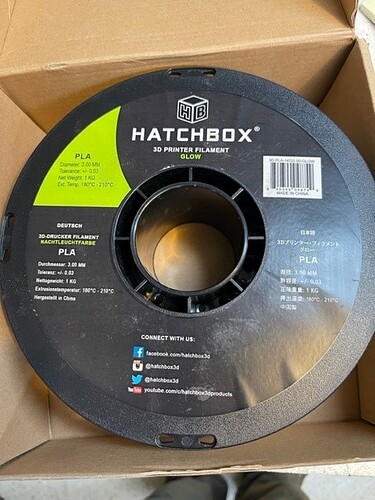 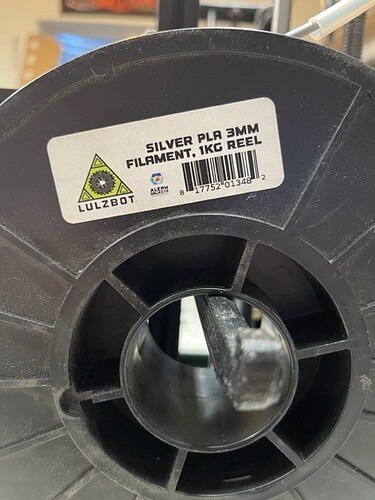 Here is the starting point. 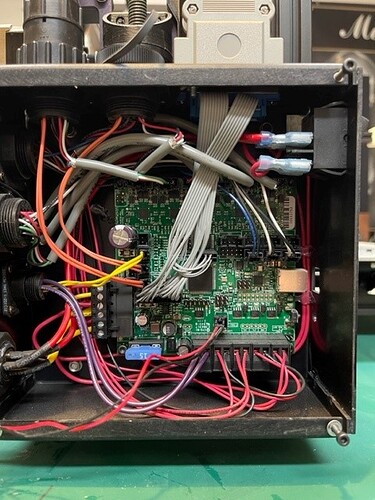 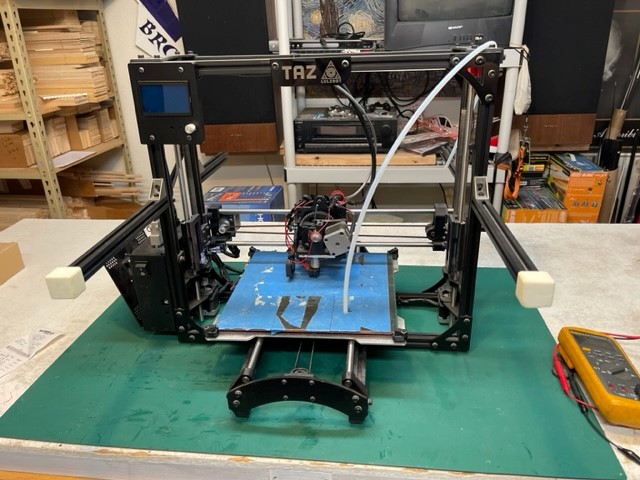 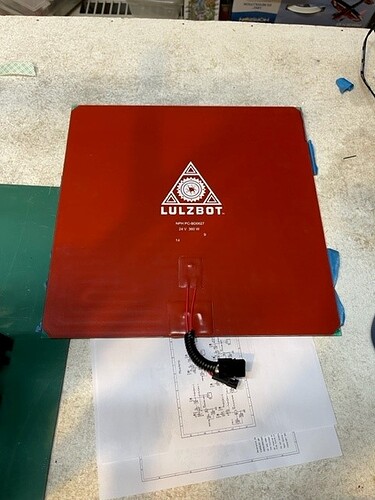 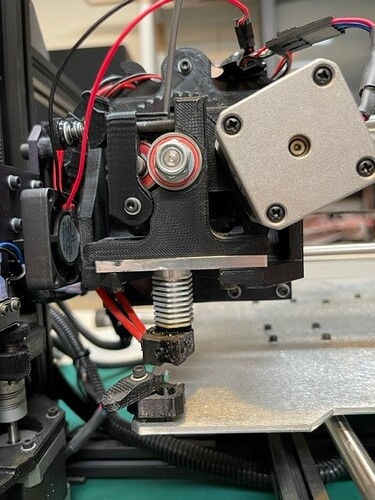 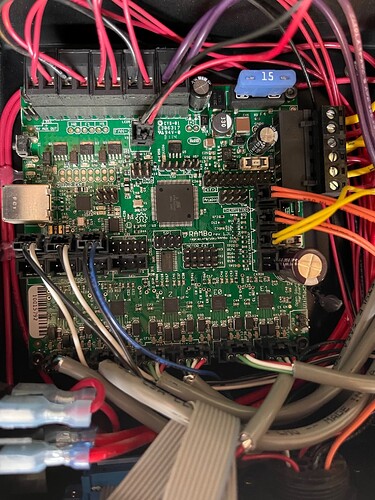 We found on the Y axis the switch was missing its lever so I have a new one to install with the lever. 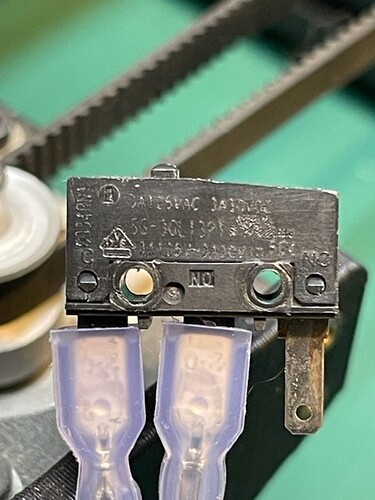 switch with no lever arm480×640 73.9 KB
Now I need to find out what kind of print head this is and what it is capable of printing.
I guess that goes along with what filament to get lol. Any idea on what this hot end is? 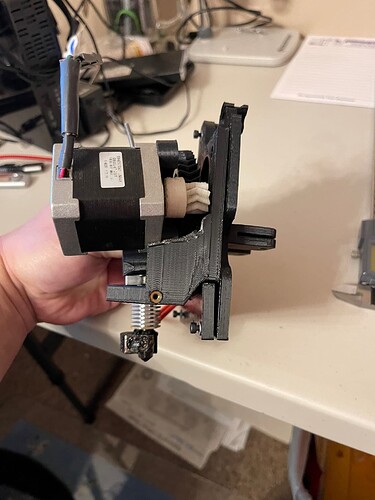 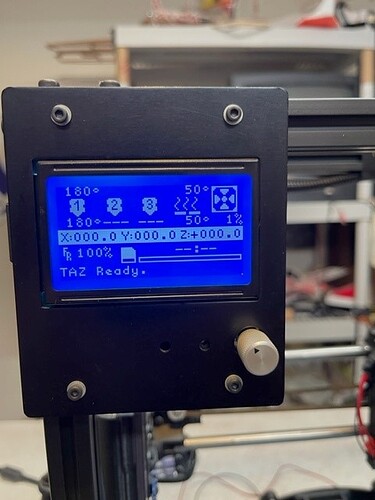 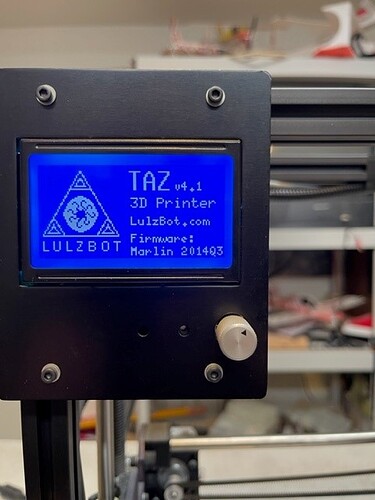 I peeled off all the crap on the Glass and it look like it is in good shape. It had some blueish thin film under the painters tape I took off. 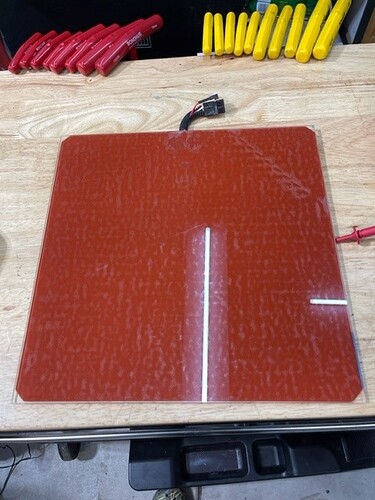 I have this on the way to put on top of the nicely clean glass plate: 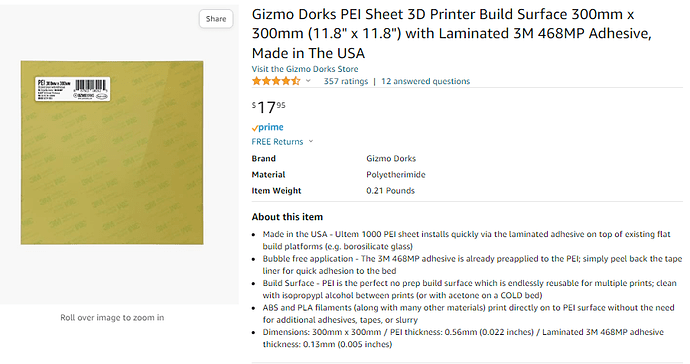 So, best thing is to get on the hardware assembly instruction site: OHAI: Open Hardware Assembly Instructions (lulzbot.com)
There is no lever on the axis limit switches. Don’t swap to one with a lever.

If it homes and squirts filament, I wouldn’t classify it as not working either.

That hot end looks pretty sad though. It’s the Budaschnozzle 2.0c. It works with 2.85mm filament, but without a part fan, it’s not going to be very great with PLA, and it’s not an all-metal hotend, so don’t go doing nylon on it. ABS and HIPS are probably your best bet, but the PTFE tube in it is going to be a weak point that probably would be causing jams or worse right now.

You can repair that printhead, but it’s extremely outdated. You’d be looking for the Budaschnozzle 2.0c print head. I’m looking for the STL files for it, but am coming up a little short. There’s some GCODE for it on lulzbot’s site: Index of /TAZ/4.0/production_parts/printed_parts/TAZ_printers/extruder_mount (lulzbot.com)

But you’ll need to make sure to insert the right startup and shutdown gcode to print it correctly.

I think you can buy the 24v fan on clearance right now: TAZ Extruder 24V Fan add-on kit | Lulzbot 3D Printers that’ll help with PLA, but it’s still not going to be great.

That is wired about not having levers. There are levers on all the other switches on this machine.

My friend is printing me out the parts fan. He has a Mini that is probably the same vintage as this one lol.
For the PTFE Tube, I should be able to replace that eh? ABS is probably going to be what I print with the most I expect. Acetone bath makes them look nice and fuses the layers together better making for a stronger part is what my friend says.

Thanks for the links. I wonder if I could adapt one of the new style part cooler shrouds onto this extruder. Those seem well thought out and wrap around the print head more. I am a mechanical designer for Advanced Energy for my day job so designing parts and re-designing parts to fit where they normally do not fit is not difficult. Would you suggest using something like that for the parts cooler if I can make that happen? I can post the model if I do make one that will retrofit. I need to pull new wires from the controller to have 2 fans. I figure I will pull 2 more so I have 3 fan lines there for the future. I can change the voltage to whatever with a buck or boost regulator. I am wondering what voltage is best to have for fans at the tool head.

Thanks for the reply Wrathernaut!
Eric 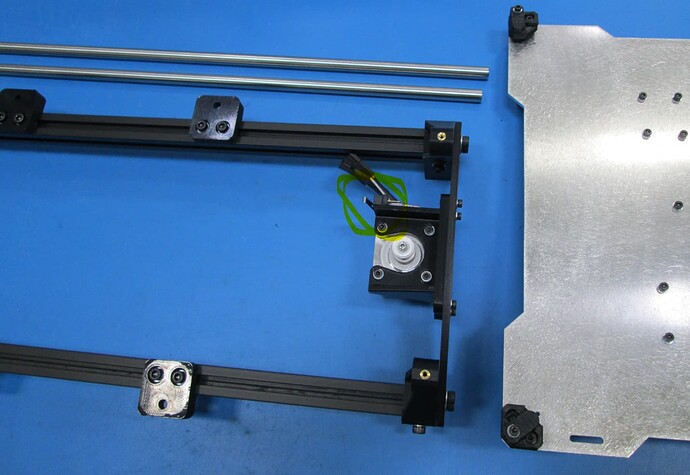 I’ve worked with the Taz 6, Mini2 and Pro, and they all do not use levers on the limit switches. I’d put it down as more accurate without them anyway, and go without.

PTFE tube is easy enough, shove some in, mark the end and cut. Only tricky part is not smashing the tube while cutting. Sharp razor blade and back and forth does pretty well.

Before putting a bunch of work into the budaschnozzle, I’d look into doing a build with a modern extruder, like the Biqu H2 (cannibalizing wiring from the buda + some printed parts would get this going for under $75 or more if you go H2 Revo), e3d Hemera with a Revo hot end (about $200 if you build), or go low-buck and get cloned Titan Aero parts and build one of those.

Before you invest in 2.85/3.0mm filament, seriously consider just going with a 1.75mm route, as it generally is the superior filament for just about anything but very flexible filament.

Boy, your thread sure brings back memories for me. I’ve built many TAZ5’s over the years, upgraded TAZ3’s and TAZ4’s to 5’s. WRT the microswitches, every TAZ5 that I’ve had the pleasure to work with (including the brand new one (first one) I bought from Lulzbot, used microswitches WITH levers). So, don’t worry about the comment about not using levers on your microswitches. They were standard on TAZ5’s (for all the axis) when they were introduced, and I use lever’d microswitches on all of my TAZ5’s to this day!

I have the PEI sheet installed onto the print bed. Went on fairly easily.

I heated up the print head and cleaned off all the gunk all over it. I just peeled off the rest of the silicone that was stuck half on it. 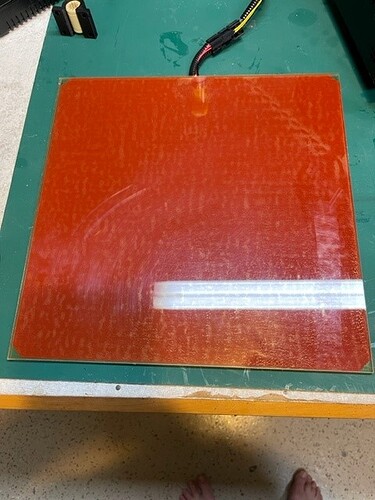 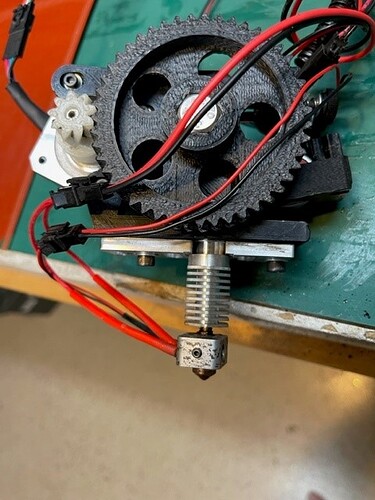 Very brave of you. I got a TAZ 5 in similar condition, it’s a bit of an adventure but eminently doable.
The poly bearings and rods work OK so just replace them but it will print - just not as nice - even with sloppy bearings.
Your extruder is missing two fans. The first aims at the cooling fin section on the hot end, stops heat conducting upwards and melting things it shouldn’t. Makes it more reliable and trouble free. Download and get someone to print the duct for you, or try printing it as-is, it might work. Second fan mounts usually on right side, aims at the nozzle to cool the plastic as soon as it is extruded.
The extruder will handle 2.85 or 3mm OK. PLA is easiest to work with and also cheap.
Once you get it going consider transition to a new extruder for 1.75mm filament (so don’t buy lots of 2.85/3mm stuff!). Lots to choose from (I have a Hemera, works great), opens up lots of possibilities.
Apart from that, good luck, I hope you get it going soon!

I have most of the parts already and some on the way to upgrade all 3 axis to Openbuilds v-groove rail and wheels. I wish I could be working on it today but the water pump in the old 96 Blazer needs to be replaced today. That will be fun. -NOT

I oiled and tested all of the berings and got the wheels together. Took the top plate off so I can throw it on my Mill and make some precise holes for the y axis wheels. 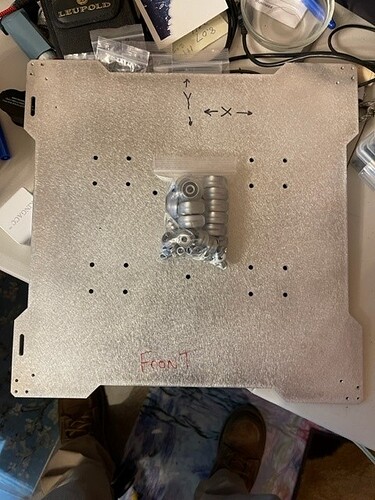 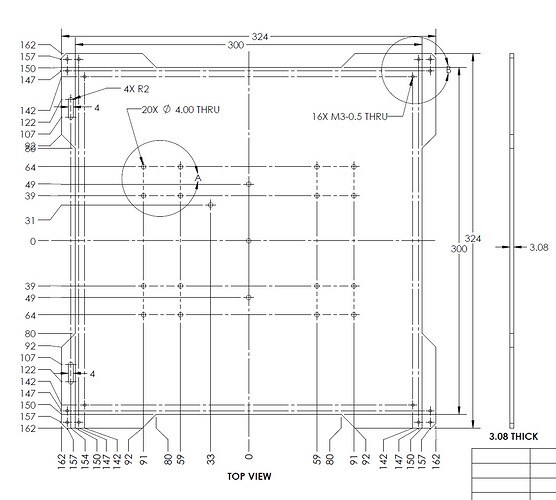